← applescript: many buttons
how to fix a ‘file in use’ problem →

ejecting some, all or just specified disks

We posted this one liner some time ago in response to the fact that you can’t actually get the Finder to eject all volumes on multiple drives at the same time.

However, I thought it’d be good to have a slightly more useful version. In this version, you can choose individual volumes or all volumes from a list. Optionally, you could also include collections. 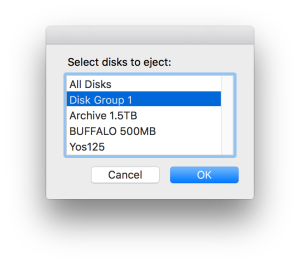 Suppose for example you wanted to eject one volume from one physical drive along with one from another and two from a third? To do that, just uncomment these two lines and supply your own volume names in the collection_1 list:

--if you want to create an item that groups some volumes together uncomment the following two lines:
# set collection_1 to {"Archive 1.5TB", "BUFFALO 500GB", "This disk", "That disk", "Another disk"} -- supply as many disks names you want to group together here
# set diskList to {"All Disks", "Disk Group 1"}
Then, when you run the script, choose ‘Disk Group 1’ to eject that collection of volumes. You could of course adapt the script to include more than one collection.

You can get the full script from my pastebin here.

Independent Software Developer, Technical Writer and Researcher at SentinelOne. Explaining the unexplainable with images, video and text. Scripting anything imaginable in AppleScript, Bash, Python and Swift.
View all posts by philastokes »

Posted on August 16, 2016, in AppleScript and tagged applescript, eject, finder. Bookmark the permalink. Comments Off on ejecting some, all or just specified disks.

← applescript: many buttons
how to fix a ‘file in use’ problem →